On 44 acres of a wooded lot in the township of Dalhousie, in Eastern Ontario, George Fisher has made a comfortable retirement for himself. Dwelling in his log home in the bush and logging some of the trees on his property is how Fisher has spent the last 15 years. Fisher is a retired teacher and currently a member of the Eastern Ontario Model Forest. 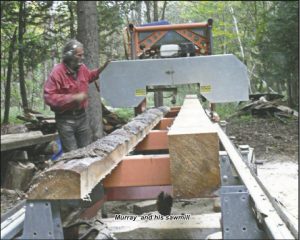 Sawing storm fallen trees from last fall is Fisher’s current task. The trees are mainly cedar but there is also some spruce as well. “We were able to get a 2×10 out of one of the cedars, so that comes from a pretty good looking tree,” Fisher said.
Most of the wood is used by Fisher for projects around his home. “We continually need lumber for decking,” Fisher explained. He uses the cedar for decking and his sauna is also made mostly from material on his wood lot.
The wood that is not used, mainly the big cedars, he sells at the log auction in Kemptville, Ontario.

Although a small operation, Fisher occasionally hires someone to help retrieve the logs from the bush. He has his own skid-steer and hires Murray Edwards who brings his Timberjack log skidder and Norwood portable sawmill. “The oldest Timberjack in Ontario, maybe the world,” Edwards said.

Fisher makes sure to get the most out of his bush. He has about a dozen maple trees that he taps for his own pleasure and jokes, “we are expanding to 25 this year.”

Taken from the The Working Forest Newspaper – Fall #1 2012 Edition

How Long Should Your Band Saw Blade Last?

Philosophy of a Tree-Hugging Environmental Sawyer

How Long Should Your Band Saw Blade Last?